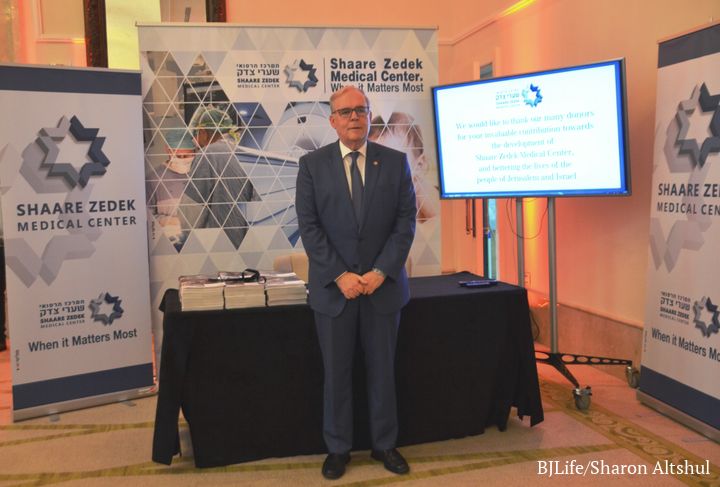 Shaare Zedek: The Future Is Here

“This conference is about innovation, and hospitals can contribute to innovation in the medical and scientific world.”

There are 4 key responsibilities that a major hospital has, according to Professor Halevy.  Hospitals cure diseases and save lives; eliminate physical and emotional suffering; train the next generation of medical and paramedical personnel; and contribute to medical research.

He noted that when it comes to the fourth responsibility – medical research – Shaare Zedek is at the forefront.

“Most modern medical achievements are accomplished through cooperation between universities, the pharmacological industry and hospitals,” he said.

Shaare Zedek established a Medical Research Centre ten years ago.  This centre cooperates with hospitals around the world to hold clinical trials and develop new medications and treatments to help cure the sick.

“Shaare Zedek plays a central role in innovative medicine in the State of Israel,” Halevy added.

In his speech, entitled, “The Future is here:  Innovations and Breakthroughs in Cardiology,” Professor Glikson said that Israel’s breakthroughs in the world of cardiology is revolutionary.  Per capita, Israel is the world leader in medical patents and that a significant number of these are in the field of cardiovascular disease.

Often, said Prof Glikson, the successful discoveries that are conceived in Israel are then marketed by American and other companies around the world.

He outlined major innovations being implemented at Shaare Zedek hospital that were born from Israeli innovation.

The transcatheter aortic valve replacement procedure for severe narrowing of the aortic valve which spares a patient from undergoing painful surgery and, using a catheter, brings a new valve into its place in the heart to restore normal flow.

Similarly, the mitral valve can be repaired by a clip using the principle of a stapler that staples the two leaflets of the valve together

Prof. Glikson demonstrated how pacemakers have continued to decrease in size, so much so, that it’s possible to implant capsule – like pacemaker (leadless pacemaker) without a pacemaker box and leads, using the groin as an entry site without leaving any surgical scar. Another tiny chip-like device for monitoring heart rhythm (implantable loop recorder) is injected under the skin and performs like an EKG machine that can remain in the patient’s body for up to three years.

Wearable monitoring vests, 3D Mapping algorithms, new stents for coronary and other vessel occlusions, and devices to protect the brain from blood clots that embolize from the heart are all new technologies used regularly in cardiology daily practice.

The Australian Jewish community is benefitting from medical innovations at Shaare Zedek with a Gene Screening program currently being offered to the local community.  For more information about this program visit jenescreen.com.au