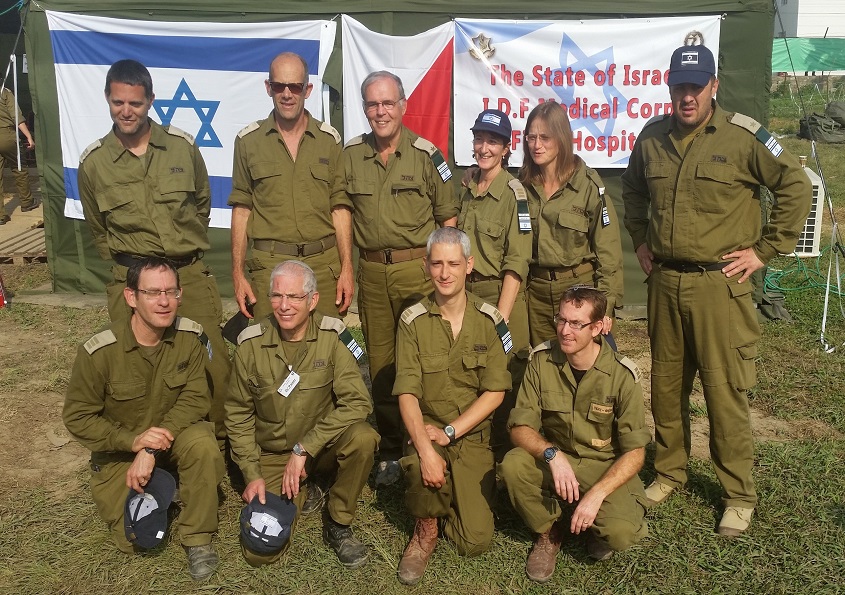 It’s a rare event when an Israeli organization receives a positive review from the United Nations. It is especially gratifying therefore that the public health arm of the UN is considering giving its highest ranking as a Type 3 medical corps hospital to Israel’s military field hospital.

Headed by Deputy General of Shaare Zedek Medical Centre, Dr Ofer Merin, the IDF’s Field Hospital has been at the forefront of humanitarian relief aid following numerous catastrophic events around the world, responding to devastating earthquakes in Turkey, Haiti and Nepal as well as a 2013 typhoon that killed over 10,000 in the Philippines.

It is now poised to take the global spotlight once again as the first foreign medical team to potentially earn the World Health Organization’s highest ranking.

The experience in Nepal in April 2015 was a particularly significant one for the IDF Field Hospital and Shaare Zedek played a crucial role. Shaare Zedek’s Director General Professor Jonathan Halevy led the internal medicine ward, and his Deputy Dr Ofer Merin ran the entire IDF Humanitarian Field Hospital in the devastated zone

The head of the WHO’s Foreign Medical Teams unit, Dr Ian Norton is a specialist in emergency medicine and former head of his native Australia’s emergency response team. Dr Norton joined the WHO in 2013, developing the WHO’s classification system which classifies foreign medical teams according to the level of care they can offer. A Type 3 status field hospital needs to provide a wide variety of services and have 40 inpatient beds and two operating rooms.

Dr Norton was part of a delegation that visited Israel in September to tour the IDF Medical Field Corps’ field hospital. The 26 tent complex can be assembled in less than 12 hours and has all the functionality of an advanced brick and mortar medical centre.

Dr Norton visited six of the field hospital’s tents during a training exercise with his team and categorized the facility as “impressive.” Dr Norton said that said that while no final decisions have been made yet, the IDF team’s broad experience in international disaster relief efforts give him reason for optimism about Israel’s chances of receiving the coveted rating.

A final decision will not be made until November 8th or 9th.

“I’ve seen dozens of field hospitals from various countries,” said Merin. “There is something unique in our abilities, to get there fast and be independent. And in our worldview, that is essential.”

The prestige of being the first team to be awarded the Type 3 designation would firmly establish Israel as a global leader in emergency medicine while also giving the IDF team the ability to serve as first responders in future disasters.