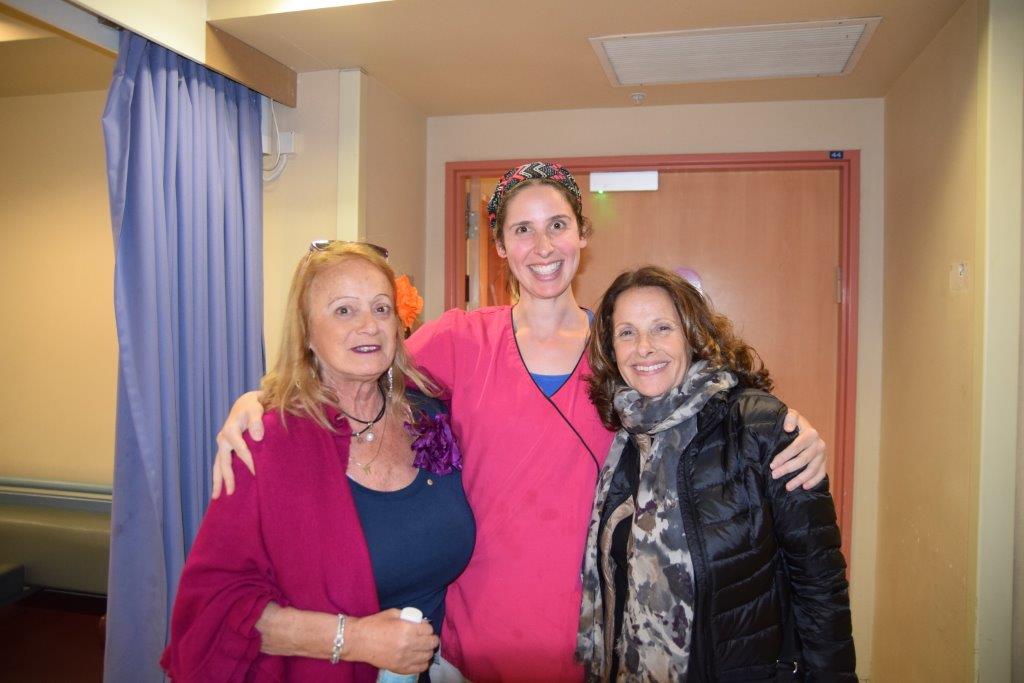 I visited Shaare Zedek early in January 2016 and found it really exciting and exhilarating to see how the hospital has been modernized and transformed since my last visit.

I was shown around the hospital by Uri Shwartz who really is a huge asset to the hospital.

Viv Fried visited Shaare Zedek with me. We did an outstanding tour of the new Wilf Children’s Hospital which looks vibrant and modern. Every floor is decorated in the colours of the rainbow, and we could see the children benefiting from both the care of the doctors who treated them and the colourful environment in which they were being treated.

We visited the new maternity ward and we surprised Monique Tempelhof Katz. Monique was delivering a baby at the time and came out to greet us. What was really extraordinary to me was to see the way the image of the hospital is so highly respected in Israel.   When one speaks to doctors and patients, the high regard they have for Shaare Zedek is very evident.

We visited the trauma department which was quite moving. The medical personnel there explained to us how the department operates when residents of Jerusalem are attacked. They showed us how in an emergency, patients can access the trauma unit within minutes.

I accompanied an old friend who is an ex Melburnian to an appointment in the oncology ward with Dr Nathan Cherny. While he was seeing Dr Cherny, I went and spoke to different patients who were receiving treatment that day and spoke to many volunteers. A visitor from NY who was working as a volunteer acted as my translator.

I met two women who were having chemotherapy and talked to them while they were having their treatment. Next to them were two other women who were volunteers. I asked them how often they come in and what do. They said we come in twice a week and serve tea and coffee and meals to patients. When I told them I was from Australia and that there is an Australian Friends of Shaare Zedek they were quite excited. I explained to them that we too are volunteers and that we raise funds for Shaare Zedek from the Australian community.

They asked me what made me be involved with Shaare Zedek. I said that I have a very close friend in Melbourne, Robert Epstein, whose life was saved at the hospital many years ago. I got involved because of that. He recovered from surgery and we now have a very dynamic committee in Melbourne, headed by Dr Allan Garfield.

These two women put their hands on my head and said, We are so moved that there are people in Australia doing this work and that Hashem should bless us.

As I moved through various rooms in the hospital, I spoke to many patients. What touched me was their positivity and the way they really believed that their extraordinary Doctors are going to help them recover.