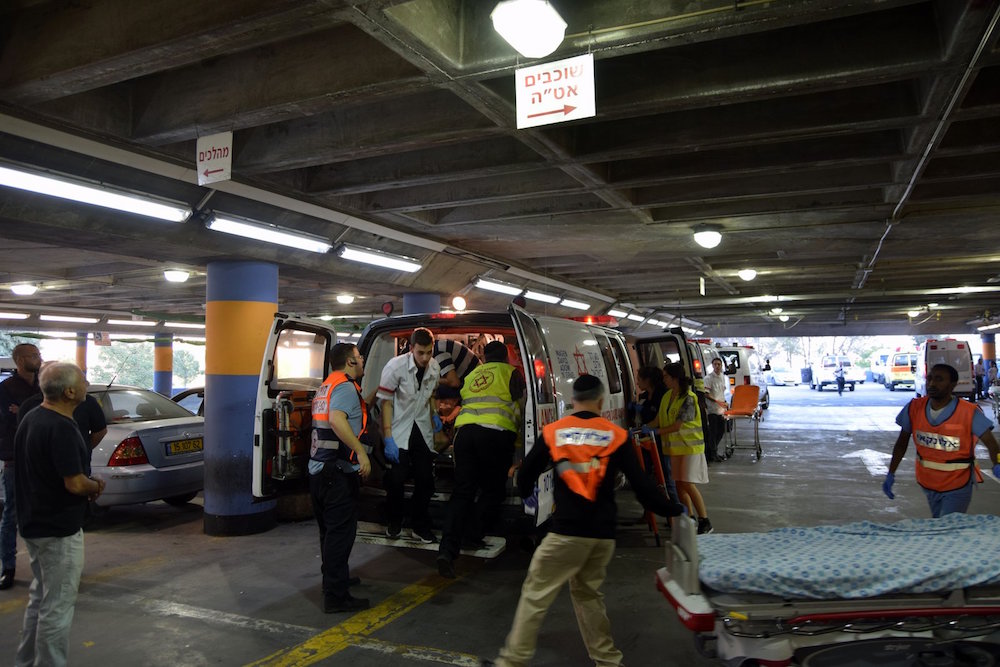 Over 80% of victims of terror in the current wave of attacks striking the Jerusalem area are treated at Shaare Zedek’s Emergency Centre.

Professor Jonathan Halevy, the Director General of Shaare Zedek Medical Centre notes, “A large number of the very serious and critically wounded are brought to Shaare Zedek because of its easy accessibility between two and 10 kilometres from where most of the terrorism victims had been knifed, run over or shot.

The hospital’s central location and its experience with all types of trauma cases makes it the natural choice for emergency responders. Shaare Zedek’s Department of Emergency Medicine ranked first in a nationwide survey of emergency rooms throughout Israel last December, according to Israel’s leading business newspaper, The Marker.  Shaare Zedek has also been asked to help provide medical training to several groups including volunteers from Hatzalah and soldiers who will be serving as paramedics during their military service.

On over 250 occasions since last August, ambulance crews have alerted the emergency room staff at Shaare Zedek that a victim of a terrorist attack is on the way.

Shaare Zedek is playing a pivotal role in Jerusalem.

Shaare Zedek is renowned as the Hospital with a Heart. So how does a hospital that cares for its patient’s physical and emotional wellbeing deal with the psychological trauma of constant deadly terror attacks? Even if the patient survives the emergency life saving surgery, often the emotional toll on both patients and medical staff is huge.

In an event that is characteristic of Shaare Zedek’s compassionate approach, the hospital last month hosted an evening to reunite survivors of terror attacks with the medicos who saved their lives.

Shaare Zedek hosted “An Evening of Appreciation for the Trauma Teams,” to offer a “breather” and a moment of healing.

The evening offered the opportunity for survivors of terror attacks to enter Shaare Zedek through the main entrance instead of being rushed through the ambulance bay into the Trauma Unit. It gave the opportunity for doctors, nurses, social workers and technical staff who had treated so many victims, to see those victims walking into Shaare Zedek on their own. Paramedics and medics from Magen David Adom and United Hatzalah who had treated victims at the scene and then rushed the victims to the hospital were invited as well for an evening of music, thanksgiving and emotional healing.

One of the many important projects funded by the AFSZ is the state of the art patient tracking system in the emergency department. The system uses RFID technology to enable the streamlined treatment of patients brought to the emergency room in a crisis scenario.

Dr Garfield says, “We appreciate the generosity of the Australian community and urge everyone to support Shaare Zedek during these challenging times.”