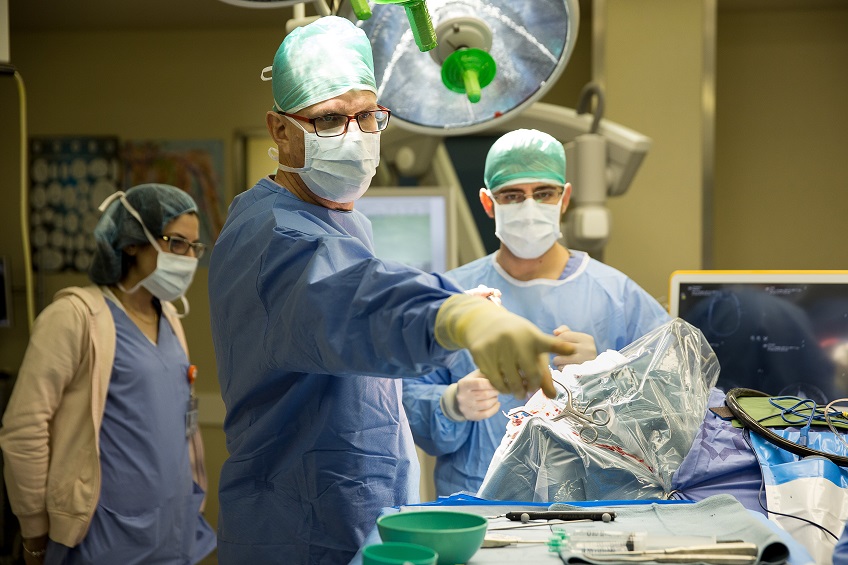 During his recent visit to Israel, Mr Robert Epstein observed the annual Board of International Directors meeting at Shaare Zedek Medical Centre and witnessed the extraordinary growth of Jerusalem’s largest and most central hospital.

Robert and Ruth Epstein serve on the Executive Board of the Australian Friends of Shaare Zedek with Robert as Honorary Treasurer of the AFSZ.

Robert says, “There is a sense at Shaare Zedek that the Hospital is on adrenalin. The growth is so fast that it is breathtaking.

“I was privileged to hear a presentation from the director of the newly opened Helmsley Neurological Centre,” says Robert.

“He described how Shaare Zedek is now at the forefront of Israeli medicine, and is positioned to provide a comprehensive medical response to neurological events.

“The prognosis for stroke victims in Jerusalem has vastly improved. There are cases where the patient is brought in virtually paralysed, and is able to walk out 24 hours later. Shaare Zedek has instituted the use of apps that are used in the ambulance whilst the patient is being transported to hospital. Relevant information is entered and is available as the patient arrives at Shaare Zedek.

“The stroke unit in the Neurological Centre recently treated Rabbi Adin Steinsaltz when he suffered a stroke and put him back on his feet.”

According to Director General of Shaare Zedek Professor Jonathan Halevy, the new Stroke Diagnosis and Treatment Unit which opened in March, treated 835 cases by the end of the year.

Brain catheterization and Neurosurgery are now routinely performed at the hospital as part of the newly opened Helmsley Neurological Centre.

The growth has been evident in all areas of the hospital. Professor Halevy recently reported that in 2016, Shaare Zedek Medical Centre treated over half a million patients.

According to Professor Halevy, “2016 was another turning point for Shaare Zedek Medical Center. The Hospital continued on its path of dynamic growth, adding new services, dedicating new departments and undergoing significant renovations and expansion.”

The Weinstock Department of Emergency Medicine treated over 149,000 patients, many of them victims of the recent increase in terrorist and other attacks in Jerusalem and the surroundings areas. New equipment introduced to the Department, including an advanced ECMO machine (external life support), helped improve the medical team’s treatment abilities.

In 2016, 22,400 babies were born at Shaare Zedek across the 2 campuses. Shaare Zedek is the largest and most active birth centre in the country and one of the busiest maternity hospitals in the Western World.

Shaare Zedek inaugurated a Sports Medicine Centre, The Oral and Maxillofacial Surgery, The Diabetic Foot Clinic, the Eating Disorders Clinic among numerous others.
Shaare Zedek is one of Jerusalem’s largest employers in the city, with a staff of over 4,000 people – including 1,000 doctors, 1,500 nurses and 1,500 paramedical staff, management and support workers.

Shaare Zedek constantly invests in the improvement of the hospital’s infrastructure. It does so with minimal financial input from the Israeli Government and relies on donations for capital upgrades.

Robert notes, “Shaare Zedek has a huge responsibility to the citizens of Jerusalem. It has developed a comprehensive hospital expansion master plan which has been approved by the local planning board and is designed to create an environment to enable Shaare Zedek to expand and serve the community for many decades to come.”

“A donation to Shaare Zedek Medical Centre is a worthwhile investment in the infrastructure of Jerusalem and a meaningful way of securing a healthy future for Israel.”