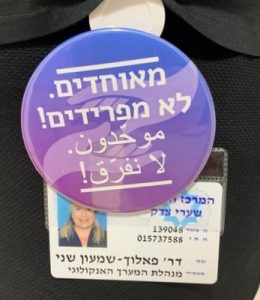 A Model Of Coexistence

Shaare Zedek Medical Centre is located in the heart of Jerusalem, crossroads of civilizations.  Doctors, nurses, healthcare workers and patients of all races and religions leave their political allegiances outside the hospital and operate side by side to save lives and offer compassionate medical care to all.

When recent media reports in Israel described the separation of Jewish Israeli women and Arab Israeli women on maternity wards in several Israeli hospitals, the response was immediate and powerful.

A group of doctors established a forum “The Health System as a Model for Coexistence” and launched an initiative where medical teams from all sectors, irrespective of religion, race and gender, wore badges that stated “United. Not separated.”

These doctors posed for photos together as part of a Facebook campaign to promote unity, tolerance, respect and awareness.

Shani said, “The coexistence is felt in full force especially in Jerusalem, where there is a wide range of populations. We work together daily, side by side with a common goal of saving lives.”

As Jerusalem’s most central major hospital, Shaare Zedek has a long history of treating people of all races and religions in an atmosphere of compassion and dedication to ethics.  It has a zero tolerance policy for discrimination amongst the staff and patients of the hospital.

Prof Lynn Gillam, Academic Director and Clinical Ethicist, Children’s Bioethics Centre, Royal Children’s Hospital says, “Respect is a fundamental ethical principle – it seems that it hardly needs to be stated. But when there are differences in views and values, culture and religion, respect for each other in the face of these differences becomes ethically crucial.

“This conference will focus on re-affirming the principle of respect and working out how to put it into practice in the diverse, high-stakes environment of children’s health care. We are excited to have Prof Steinberg give the opening address of the conference and look forward to hearing more about this wonderful Shaare Zedek initiative.”

Prof Agnes Bankier OAM, Chair of the RCH Human Research Ethics Committee and Deputy Chair of the AFSZ Inc notes, “Shaare Zedek is a unique hospital, located in the centre of the ancient city of Jerusalem.   We are proud to host Prof Rabbi Steinberg during his forthcoming visit to Australia and look forward to a most worthwhile lecture tour.