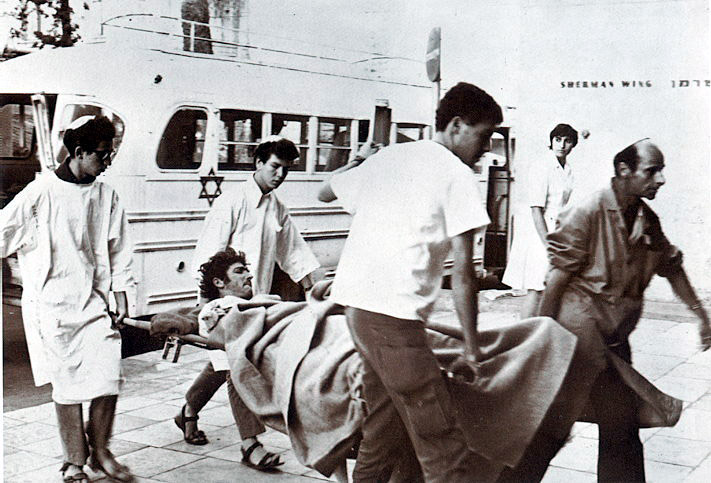 Shaare Zedek’s war: Inside the hospital during the 6 Day War

For over 100 years, Shaare Zedek has played a crucial role in every aspect of Jerusalem’s turbulent modern history.

During the June 1967 Six-Day War, the hospital itself was within the line of fire, serving as a front line military hospital.

In an article on www.timesofisrael.com, Mayer Fertig describes how Shaare Zedek which was located in its original home on Jaffa Road, was the hospital closest to the combat — just a few short kilometres from the front and under frequent Jordanian fire.

The hospital’s archives describe how in the early hours of Monday, June 5, 1967, the telephone hotline from Israel’s military headquarters rang at Shaare Zedek, then located on Jaffa Road.

The Hospital’s well-oiled “State of Emergency” apparatus was activated. Phones soon rang at the homes of the hospital’s administrative and medical staff. Ambulances rushed out of the gate with urgent messages. Dr. Falk Schlesinger, the hospital’s director-general, arrived inside minutes.

Activity was intense. Groups of volunteers began to take up pre-assigned duties. The emergency generator was activated. Windows were covered with blackout material, sandbags strategically placed. Beds replaced desks. Even the hospital’s main corridors were soon lined with extra beds and stretchers.

The Brith Milah hall, classrooms in the School of Nursing and the nurses’ own dormitories were soon converted into emergency wards.

Just two hours after the military hotline first rang, Shaare Zedek was fully prepared — a civilian hospital now transformed into a front-line military hospital with a greatly increased bed capacity. The underground operating theatres and teams of surgeons were ready for action.

At about 11 o’clock in the morning of June 5, the Jordanians began to shell Jewish Jerusalem and blast border areas with machine-gun fire. Shaare Zedek received the first casualties of the war, among them a young mother who had been carrying her baby as she searched for shelter near the Old City. Tragically, she never made it; her baby was an orphan.

The Israel Defense Forces replied to the Jordanian attack. Jerusalem echoed with the noise of war. Wounded soldiers were brought in by military and civilian ambulances — more than 150 on the first day, alone. Surgeons operated nonstop for the next 70 hours under the bright lights of the underground surgical suite, performing many amputations to save the lives of soldiers.

The soldiers, many with severe wounds, were very brave. They did not shout or cry. Some asked that their comrades be treated first — “I can wait, only a few [pieces of] shrapnel…” All present admired their wonderful spirit…soldiers of Israel. Quite a few defied doctor’s orders and after receiving treatment rushed off to rejoin their comrades on the front.

Hardly a day had passed and Shaare Zedek had already received over 150 wounded.

Jordanian prisoners were treated, too, as was eleven-year-old Hadiya Abu Gardia, an Arab girl found with a wound in her neck. She was found by the IDF in the Deir Abu Tor Quarter of Jerusalem and was brought to Shaare Zedek. She suffered cardiac arrest on the operating table but survived.

With the fighting only a few kilometres away, some shells fell very near the hospital. The Shaare Zedek campus sustained three direct hits during the hostilities, including one that struck the roof to the left of the main entrance, just above a nursery ward with eighteen babies. Miraculously, the shell did not explode, and no one was hurt.

Doctors, nurses, and volunteers at Shaare Zedek worked around the clock for the duration of the war, performing more than 200 operations and saving many lives among the 450 wounded soldiers and civilians they treated in just 70 hours

Finally, in what might certainly be taken as a sign from Above, after the war ended, a very curious thing happened on the Shabbat that immediately followed. The number of births — which averaged three a day at Shaare Zedek at that time — shot up to 24, nearly one an hour during a single Shabbat!

Perhaps more incredible is the fact that this year some 60 babies, on average, are born each day at Shaare Zedek Medical Center, including its Bikur Cholim City Center Campus. That’s well over 22,000 births a year.

Dr Allan Garfield, chairman of the Australian Friends of Shaare Zedek notes, “The dedication, professionalism and lifesaving skills that were displayed by Shaare Zedek staff during the Six Day War permeate every aspect of the hospital’s functioning even today.

We pray that in future, the hospital only has to serve its citizens in times of peace.”